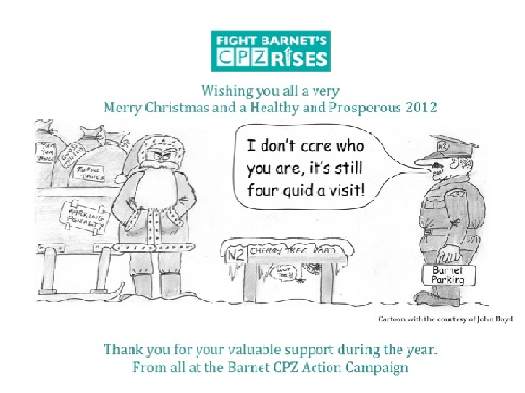 Posted by Barnet CPZ Campaign at 08:51 No comments:

ACT NOW - London Borough of Barnet Civic Awards AND Petition to Reverse Parking Charges
Many of you may be aware that the annual Barnet Civic Awards nomination deadline of December 31st is fast approaching.  Nominees for these awards are people resident or working within the borough and who have provided a significant contribution to the local community in 2011.   Barnet CPZ Action committee would like to recommend you nominate the following individuals for these awards:
- David Attfield, who, as you all know, has led the Barnet CPZ Action legal fight for the benefit of thousands of households in the borough.
- Derek Dishman, aka Mr Mustard, for extensively monitoring and keeping his website followers well informed on Barnet Council decisions and actions (for more information please visit  http://lbbspending.blogspot.com), and who has also been extremely supportive to the Barnet CPZ Action campaign.
We hope you will share our feelings towards the above individuals and spare a moment to fill in the attached form that we have downloaded from the following web-link: http://www.barnet.gov.uk/civic-awards-2012.pdf
We believe that these Awards can represent a great opportunity for those of us who feel strongly about the democratic process and perhaps deliver another wake-up call to some of our Barnet councillors, so please ACT NOW AS THE DEADLINE FOR NOMINATIONS IS 31st DECEMBER 2011.
The address for delivery of nomination forms is:
The Mayor’s Office,
Civic Awards, London Borough of Barnet
Oakleigh Road South
London N11 1PN
Should you require David Attfield's contact information, please do not hesitate to contact us at barnetcpz@gmail.com.
*************************
You will probably share our enthusiasm for the signing of this new petition started by Labour Councillors regarding the parking situation in the borough.  If you have not seen it, please check out the link below.
Labour Group e-petition to reverse parking charges is now online
To sign the petition go to: http://petitions.barnet.gov.uk/parkingcharges/
The aim is to get 7,000 signatures by March next year, which by law would force a council debate on the issue.
2,000 signatures would result in an officer review of the policy.
Please circulate the petition to friends, family and supporters and ask them to sign.
The text of Labour's parking petition is:
"We the undersigned, request Barnet Council to reverse the parking charge increases implemented in 2011 that are having such a damaging impact on our local town centres and residents at a time when they can least afford it. We need action now to help small businesses and relieve residents. We believe that reversing the parking charges will increase the number of shoppers in our town centres, giving struggling local businesses and traders a much needed boost and helping our hard-pressed residents in these difficult economic times."
Posted by Barnet CPZ Campaign at 14:23 No comments:

The BBC series Rip Off Britain has today included coverage of our campaign.

The broadcast  includes an extended interview with a campaign member, active campaign supporters Janis and Ken, various other Barnet residents as well as local builders, all of whom are severely impacted by the rise in Barnet parking charges for visitors and residents. Also appearing in the broadcast was Paul Watters from the AA who characterises the unfairness of the parking charges as blatant profiteering.

Barnet council were asked to respond via interview, they chose only to respond in writing essentially saying that the residents asked for the CPZ and can now ask for its removal.  The council did not respond to Rip Off Britain on the essential point of unwarranted price rises except the same old same old 'in line with other boroughs'.

To view the broadcast click this LINK and scroll to 31½ minutes.

UPDATE
The Rip Off Britain excerpt now appears on youtube:

Posted by Barnet CPZ Campaign at 14:15 No comments:

Barnet CPZ Action feature on BBC Inside Out and BBC London 94.9

Our campaign to overturn Barnet's outrageous CPZ charges has been featured in two recent BBC programmes.  You can access them below if you missed them.

Inside Out is an investigative current affairs programme for London. They looked at parking charges in a number of boroughs but even in this rogue's gallery, the £4 cost of a visitor voucher in Barnet stands out.


The same day, BBC London interviewed two of our supporters on its Drivetime programme, who spoke powerfully about the impact of the charges on the elderly and young families in particular.   The presenter begins by commenting that, in some boroughs, charges over the past three have gone up by 50% but that in Barnet "they have gone up by much, much more".

The actual interview done by Anna O'Neill of BBC London News is also served on the Audio Boo website as below.


Posted by Barnet CPZ Campaign at 10:06 No comments: