Posted by Barnet CPZ Campaign at 21:27 No comments: 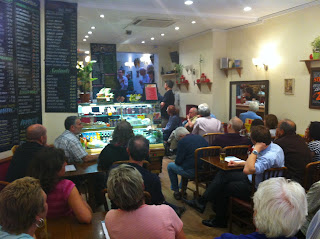 A big "thank you" to the 100 people who crowded into the New Local Cafe on 2 June to show their support for the campaign.  It was particularly good to see so many parts of the borough represented.

"I remain of the view that the challenge has prospects in the region of 65-75%.
In light of the stance taken by Barnet, I would have thought that the prospects are
in the upper end of this range"
A WORD OF WARNING
A number of  supporters have received incorrect information telling them that the parking service was running at a loss and that CPZs were being subsidised by the council tax. The Council has refused to say who was responsible for this information.
The information is UNTRUE. Barnet's accounts show that Parking has generated multi-million pound surpluses year in, year out for the Council. Indeed, for the past financial year, the Council has forecast a profit from Parking of well over £4 million. Even before the increases, CPZ residents were contributing  handsomely to road maintenance and other transport services across the borough.
In the Court case, Barnet have even admitted that Parking was in profit to the tune of millions of pounds. So Barnet are happy for residents to be mislead, but even they won't mislead the Court.
Posted by Barnet CPZ Campaign at 08:58 1 comment: