Posted by Barnet CPZ Campaign at 21:54 No comments:

One of our supporters has provided the following account of an election walkabout by Boris Johnson in Golders Green.  Inevitably, the Mayor had to field complaints about parking.  The visit has also proved controversial because of an allegation that Brian Coleman mis-used his Barnet Council free parking permit in order to avoid  parking charges on Golders Green Road.

Boris's walkabout in Golders Green Road made slow progress with traders coming out of their shops to challenge him to disown Cllr Coleman's parking policy, which they say is killing local shops. 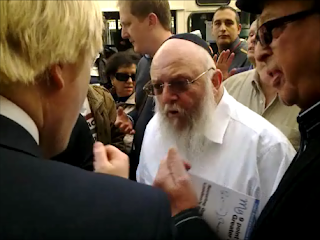 Warren Gold, owner of Gold's Menswear, said three or four of his customers were getting penalty tickets every day because the pay by phone system was not understood.  He pointed out ten empty shop units to Mr Johnson.

As two more shopkeepers approached Mr Johnson he put his hands up and said: "Don't tell me - parking? "Traders are angry at the increase from £300 to £525 for a business parking permit and the removal of coin parking meters for shoppers parking.

The Mayor said he would hold  a review of non-residential parking on TfL roads. But this is only 5 per cent of London's roads, and he ignored questions about residents' parking permits in Barnet which have gone up from £40 to £105."
The visit has also proved controversial because of an allegation that Brian Coleman mis-used his Barnet Council free parking permit in order to avoid  parking charges on Golders Green Road
http://www.times-series.co.uk/news/9653256.Senior_Tory_investigated_over_claims_he_dodged_parking_fees_he_introduced/?ref=mr

Our supporter who was there on the day had in fact already alerted us to the use by Councillor Coleman of his Barnet parking permit on this visit.  We asked for Councillor Coleman's response three days ago.  Sadly, our request for clarification has been ignored.

So what is Brian Coleman's explanation?  Well, he has said to the local press that he was in the area visiting constituents under his role as a councillor.  However, Councillor Coleman represents Totteridge but was parked on Golders Green Road.  Video footage of Boris Johnson's visit also shows him being accompanied by Brian Coleman.  We keep an open mind but think further explanation is required. 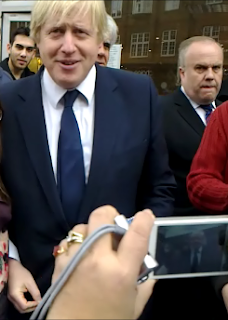 We understand that an investigation into this claim is underway, so hopefully the facts will soon be established.

You can read more about Boris's Golders Green walkabout on the Barnet Bugle website.
http://www.barnetbugle.com/

"Brian Coleman is bad for business, he should be taken in chains to Siberia.  Come here on a weekday and the shops are empty."

Mr Gorman told Boris Johnson: "Mr Coleman is trying to raise as much money as possible in revenue at the expense of shopkeepers.  I thought it was about congestion, not revenue."

Perhaps unwisely, the London Mayor replied: "You're totally right, it's being used as a tax - yes, it's a tax."
Posted by Barnet CPZ Campaign at 10:56 2 comments:

Although Barnet's CPZ parking charges are being  hiked again on 30 April, the official paperwork makes clear that the cost of annual permits will not rise IF they purchased online.

Unfortunately, nobody seems to have told the operators of Barnet's website because residents applying to renew their permits online have been charged the new rates (£105 for a first permit). If you've been overcharged, you may want to reclaim your £5 by emailing Barnet's parking team at parking@barnet.gov.uk

Meanwhile, tucked away in the small print, we've noticed that a totally new CPZ charge has stealthily been introduced. From 30 April, residents will be charged £20 for a temporary parking dispensation for themselves. A dispensation is usually sought when a resident is using a courtesy car for a few days or is changing their car. The dispensation is intended to cover the time it takes to obtain a new permit. The effect is that replacing your car will now cost £41 in additional permit charges (£21 to to transfer the permit to your new car and £20 for a temporary dispensation while you wait for your new permit to arrive in the post).  A year ago, both services were free of charge.
Posted by Barnet CPZ Campaign at 21:29 No comments:

It beggars belief but  Barnet council have today confirmed to us that parking charges for CPZ residents are being increased again at the end of April by 5%.
Under the new charges, a permit for a household’s first car will cost £105.  Each visitor voucher we understand will cost an absurd £4.20.
Barnet’s charges are already far higher than in comparable boroughs. Many residents in Haringey, Enfield, Brent and Harrow pay £50 or less for the their permit and between 50p and £1.10 for visitor parking.
The increases come into effect on 30 April.  If your permit expires on 30 April or 1 May (like many of the borough’s permits do), you can still renew at the old price of £100 but only if you agree to your new permit starting on 29 April. Unfortunately you won’t be able to do this online. However, you can renew by phone on 020 8359 7446 and ask for your permit to start on 29 April.
These leatest increases show that Barnet Council intend  to continue exploiting the small minority of CPZ residents in order to subsidise services for the rest of the borough. Even though the legal action to overturn the CPZ charges has suffered set-backs, it is more important than ever that we fight on. We will be posting details of the progress of the legal action shortly but urge you to continue supporting it. This will mean, unfortunately, calling for more donations to ensure that David Attfield can meet any legal costs that he is ordered to pay should his appeal fail.
If you feel that CPZ residents are being unfairly exploited, please let your councillors know.  You can access the email addresses of all Barnet Councillors here:
http://committeepapers.barnet.gov.uk/democracy/council/listcouncillorname.asp?intSubSectionID=13&intSectionID=9
The architect of the CPZ charges is Councillor Brian Coleman: cllr.b.coleman@barnet.gov.uk
Brian Coleman is also standing as a candidate for the Camden and Barnet seat in the London Assembly election on 3 May.
He is, of course, supported by Barnet Council Leader Richard Cornelius: leader@barnet.gov.uk or cllr.r.cornelius@barnet.gov.uk
Whilst they are not responsible for parking charges, you can also tell your MP how you feel about the Council’s stance towards CPZ residents.
Mike Freer MP (Finchley and Golders Green) mike.freer.mp@parliament.uk
Theresa Villiers MP (Chipping Barnet)   Theresa@theresavilliers.co.uk
Matthew Offord (Hendon)  matthew.offord.mp@parliament.uk

Sadly, the latest increases send a clear message: CPZ residents are easy targets and Barnet know it.  It is vital that we press on with the legal action if this vicious exploitation is to end.


UPDATE: According to  the official notice published in the Barnet Press, the cost of a permit purchased online is to remain at £100 because of an "online discount". When we checked however, online users were being asked to pay £105.   If you renewed online and have been charged £105, we suggest you reclaim the £5 you have been overcharged by emailing parking@barnet.gov.uk

We will provide you will a full update on the legal action shortly but, in the meantime, please take a minute to read some information that has been dug up by the Barnet Eye blog.

http://barneteye.blogspot.co.uk/2012/04/official-document-prove-brian-colemans.html
In summary, in an extraordinary move, Barnet Council is planning to impose new curbs on parking on both sides of Bittacy Hill in Mill Hill East.  This will reduce further the available parking, inconveniencing households who just want to be able park themselves and welcome guests to their homes whilst also putting further pressure on businesses.
But why are we mentioning this? Bittacy Hill isn't even in a CPZ. Well, as the Barnet Eye reveals, that is precisely the point. It turns out that people have been parking on Bittacy Hill in order to avoid the absurd charges that apply in the nearby CPZ.
Not only are these newly displaced drivers avoiding paying any charges to the council (they had previously at least been paying something to the council), the increased number of parked cars has been causing havoc: Residents are inconvenienced, road safety is undermined, buses and other traffic disrupted.
In our campaign, we have focused a lot on the penal cost to residents of CPZ parking. But this isn't the only consequence. Parking revenue is falling well short of that expected as people go to great lengths to avoid charges that they know are unjustified. But this in turn is causing further disruption and inconvenience for residents and businesses.  Barnet Council have created a perfect lose-lose situation.
Posted by Barnet CPZ Campaign at 21:29 No comments: