NEWSLETTER NO 9
Many of you will have heard that a deputy High Court judge last week refused David Attfield permission to take his case all the way to trial.  The reason given by the deputy judge was that David's application was similar to another challenge mounted by a Barnet resident over the summer, which was thrown out.  However, that resident did not have any legal representation and, in our opinion, did not raise a clear legal argument to address Barnet's case that the charges are permitted by the relevant legislation.  It appears that last week, the deputy judge may simply have decided to follow that earlier decision, and did not fully consider whether the arguments we raised were different.
David's barrister (Martin Westgate QC, one of the country's leading public law barristers) has reconfirmed his advice that the case is strong and that we should press ahead.  He is confident because Barnet are simply unable to address the issue at the heart of the case that high parking charges are only lawful to address a traffic management need.  At an oral hearing before a different High Court judge we will have more opportunity to convey our argument clearly.
Fortunately, thanks to your generosity, we are financially in a position to pursue the action further and we will not actively seek more donations until the case is back on track.
In the meantime, it is more important than ever that you continue to show your opposition to the charges because they remain far higher than other London boroughs and have such a terrible impact on so many people:
·      Britain's best selling family car is the Ford Focus 1.6. The £100 cost of a permit for this car in Barnet is one the highest in the whole of London.   Even Westminster and Kensington & Chelsea are cheaper.  The £100 cost in Barnet is considerably higher than in any neighbouring borough where a permit costs between £30 and £76.10.
·      The £4 cost of visitor vouchers far exceeds charges in comparable boroughs.  Most outer London boroughs charge a flat rate of around £1 for a visitor voucher.  A number of boroughs charge by the hour or half hour, meaning that a one hour visit costs as little as 30p.  Inviting eight guests to a child’s birthday party costs £32 in Barnet.  In adjoining CPZs in neighbouring boroughs (Haringey, Enfield, Brent, Harrow and Camden), that cost would be between £4.80 and £13.20.
These are facts!!!  Yet the Council continues to ignore them and their press response to last week's court ruling was: "People who live in a CPZ enjoy considerable benefits and therefore it is reasonable that they make some financial contribution. Our charges are in now line with other London boroughs" (Councilor Brian Coleman).
In addition, we understand that further increases in CPZ charges are planned for early next year, adding to the absurdly high cost.  The threat of CPZ residents being held to ransom year after year is too important and our arguments, both legal and moral, are too strong for us to give up. We fight on!
Posted by Barnet CPZ Campaign at 23:38 No comments:

Published this morning in Times Series.

Legal Action Update: Bad news from the Court but the fight goes on
On Monday we learned that a High Court judge had turned down David Attfield’s initial application for permission to pursue his legal challenge all the way to trial. In a short note of his reasons, the Judge claimed that the challenge was similar to another legal challenge mounted by a Barnet resident which was dismissed back in the summer.
This is undoubtedly a set back. We had expected to be given the green light based on two High Court precedents which establish that high parking charges need to be justified by the need to control parking or traffic in the areas concerned. Simply saying, as Barnet do, that more money is needed to pay for the Freedom Pass for the over 60s and to fix potholes across the borough is not enough (compare Barnet’s stance to that of Westminster who are bending over backwards to demonstrate that evening and Sunday parking charges are needed to control supposedly out of control demand for parking). However, we clearly failed to convey this point to the Judge.
We will also need to explain why the earlier challenge to Barnet’s CPZ charges is not a safe precedent. The resident in the earlier challenge had no legal representation and failed to advance a detailed legal argument. We need to explain why that poorly resourced legal challenge should in no way be regarded as confirming the legality of Barnet’s charges.
This is not the end of the road.  Yesterday’s decision was made by a deputy judge who considered the matter on paper. We will have an opportunity in the New Year to present our case to a more senior judge orally at a hearing. This is not strictly an appeal but more of a right to a second, more considered, opinion.  The legal team will of course need to think carefully about why the case was initially turned down. We will need to make the case sound compelling to an over-worked High Court judge who, even if just sub-consciously, would welcome reducing the workload of the courts by turning some litigants away.
David Attfield is asking his barrister, Martin Westgate QC, to assess again the prospects of success in light of this development and we will update you on this to the extent we can (some advice will need to be kept confidential in order not to inform Barnet of our thinking).  We believe the advice will still be positive because the basic facts have not changed:
The need to ensure that CPZ residents are not held to ransom year after year is too important for us to give up now. And the arguments (both legal and moral) are too strong. We fight on!

Click here and here for latest media coverage on this matter.

Posted by Barnet CPZ Campaign at 10:54 No comments:

Quiz Night Goes Down a Storm 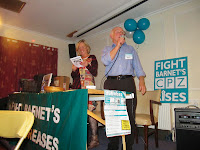 There is absolutely no sign of anger over Barnet's outrageous CPZ charges dying down. On Saturday night, 90 Barnet residents packed into the East Finchley Constitutional Club to show their support for the legal challenge and to enjoy an evening of fun and trivia.

We attach below some photos of this sell out event. Sorry to those who missed out on tickets.

Our congratulations go to the Grumpy Old Couples who were comfortable winners of the quiz and to all the winners in our raffle and auction. Thanks to everyone's generosity,  we raised over £1,500. 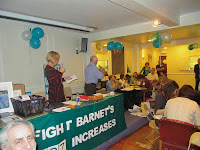 If you weren't able to attend, you can still make a donation to support our legal challenge online. Just click the "Donate" button on the homepage of our website.


Click on the pictures for the higher resolution versions. 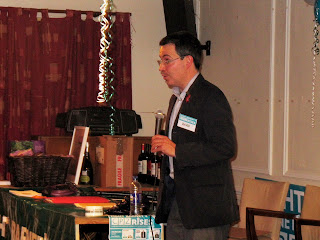 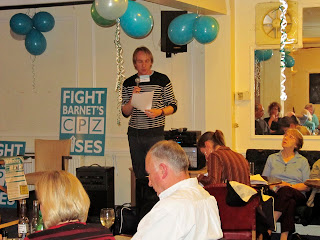 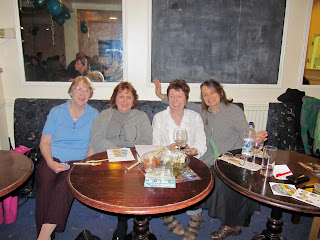 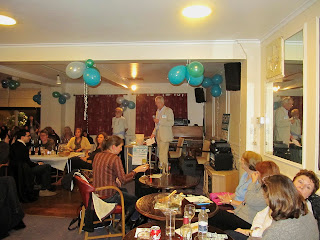 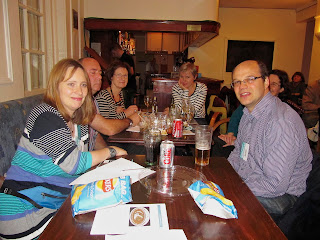 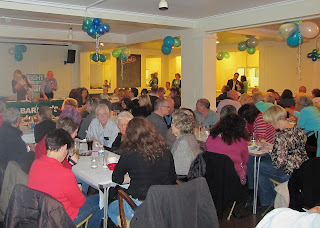 QUIZ NIGHT
SOLD OUT
We are very sorry for any disappointment.
If you would still like to participate in the auction and/or  would like to be put on a waiting list for cancellations, please email us at mailto:barnetcpz@gmail.com
Posted by Barnet CPZ Campaign at 13:52 No comments:

Hurry hurry hurry
Quiz and Auction Night Reminder
Tickets are going fast so get yours quickly to avoid disappointment.
Help us fight the battle against these outrageous increases we are all being forced to pay.
We need YOU!
As yet we have no teams from Finchley, Temple Fortune, Hendon, or Golders Green
We are also holding a Raffle with great prizes, including:
Meal for Two at the Bald Faced Stag Gastro Pub in East Finchley
Phoenix Cinema Tickets for two
Half case of wine
Waitrose Christmas Hamper
And more…..
Click here http://barnetcpz.blogspot.com to take you directly to our blogsite for tickets
Promises Auction
(click here for full catalogue).
·     Snacks by the Lazy Sally Café and licensed bar!
Join us on 12 November!
Tear your hair out with our quiz!
Win some great prizes!
Barnet CPZ Action needs your support!
Posted by Barnet CPZ Campaign at 10:26 No comments:

Quiz Night and Auction
12 November
Thanks to your generous support, we're well on the way to riasing the money we need to take our legal action all the way to trial.

But the fact is that we still need more.
So we've arranged a packed evening of trivia and fun on Saturday,12 November to raise much needed funds:
·  Trivia quiz with picture, music and local knowledge rounds
·     A truly awesome auction conducted by local celebrity auctioneers: win a week in a Majorcan holiday cottage; tickets to Lords; a garden consultation; dog grooming; hypnotherapy session; children’s photo shoot and more!  (click here for full catalogue).
·     A stellar raffle: Win a meal at the Bald Faced Stag; a Waitrose Christmas hamper or a half case of wine!
·     Snacks by the Lazy Sally Café and licensed bar!
Join us on 12 November!
Tear your hair out with our quiz!
Win some great prizes!
Barnet CPZ Action needs your support!
When: 8pm, Saturday 12 November
Where: The East Finchley Constitutional Club, The Walks, off Oakridge Drive, East Finchley N2 8DE
Cost: Just £5
To purchase click on the Donate button (upper right) marking your payment 'Quiz Night'.  Your tickets will be sent via email within 24 hours. Or send a cheque payable to “Barnet CPZ Action” to 88 Summerlee Avenue, London N2 9QH 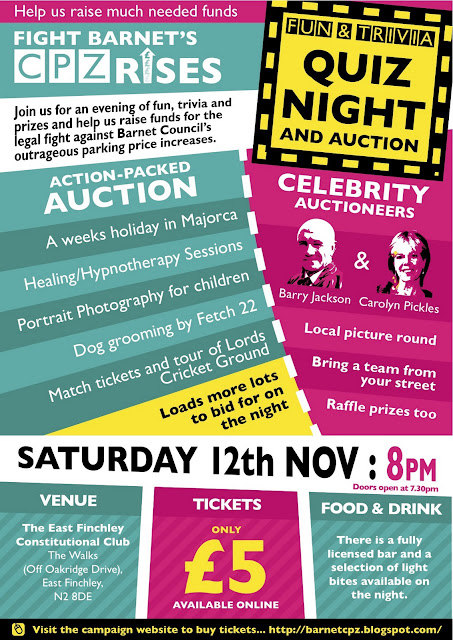 Posted by Barnet CPZ Campaign at 18:49 No comments: